The capital city of Malaysia, Kuala Lumpur is the meeting point of cultures. For hundreds of years, Malays, Chinese and Indians have mixed and mingled together in what used to be a tin mining kampung (village).  Today, Kuala Lumpur’s reverence for its ancient cultural ties is balanced by its buzzing metropolis-ness. The sixth most visited city in the world, Kuala Lumpur’s skyline is jagged with steel-clad skyscrapers punctuated by ornately carved minarets. The palm tree-lined streets are tangled with a mix of cars and mopeds, frequently at a standstill in the city’s infamous traffic jams, while side streets are a vibrant amalgamation of food stalls and colourfully adorned temples and mosques.

Kuala Lumpur is a popular layover stop for those en route to other destinations. Although it’s best to give the city a few days in order to fully appreciate all it has to offer, I too have had to kill a few hours in this city myself over the last few years. Here are some of the best things to do and see for those with only a short amount of time in this dynamic city.

One of the most popular pastimes of locals (known as “KLites”) is something to which I can completely relate: eating!

Much like the vibrant city itself, KL’s food is a hodgepodge of tasty Asian culinary traditions. This is no better demonstrated than by an evening stroll along Jalan Alor. Down a side street in the heart of KL, away form the shopping malls and modern towers, lies a bustling street alive with sounds, sights and, most alluringly, smells. What used to be the city’s red light district has now turned into a street food haven. Jalan Alor is alive with row after row of street vendors shouting out, welcoming you to try their unique specialities. Most menus are in Chinese characters, so if you don’t read Chinese it’s best you arrive with an appetite and a healthy sense of adventure when it comes to trying new food! This is not for the fussy-eaters out there.

Choose your eatery, pull up a plastic stool, order a bucket of iced beer to cool you off in the steamy KL night air, and order until your heart’s content, everything from fried whole fish to grilled sting ray. On the tables you will have bowls of chilies and traditional Malaysian salsa – but beware because this is the real deal and super spicy

If you’re after a traditional Malaysian dish, look no further than claypot rice. And there’s no better place to go for claypot rice than Kedai Kopi Pudu Satu Enam Lapan 168. I’ve eaten here several times after having it highly recommended by some local KLites and it never fails to leave me satisfied (and feeling very, very full!). Your meal is cooked from scratch upon ordering. Rice is tossed into the claypot along with your choice of meat and marinated over an open charcoal fire. The cook skillfully moves the pots around, replenishing charcoal, ensuring that each pot is cooked to perfection. Some dishes include small pieces of salt fish (known as “Ikan kurau”) or Chinese sausages.

Accompany the claypot rice with a side of “Yau Mak” (stir fried lettuce with beancurd, garlic and chilli) and an ice cold beer and it’s tough to find anything better.

Another popular pastime for KLites is shopping. In only 94 square miles, KL has managed to pack in an impressive 66 shopping malls, each more elaborate and sprawling than the last. The Suria KLCC (beneath the Petronas Towers) is considered one of the premier shopping destinations in the city. Bukit Bintang, (meaning Starhill) has the highest concentration of shopping malls in all of Kuala Lumpur, including the Berjaya Times Square (the 13th biggest shopping mall in the world), boasting an indoor theme park and a 3D Imax theatre; and the Starhill Gallery, the most luxurious shopping centre in all of Kuala Lumpur containing global fashion houses such as Louis Vuitton, Gucci and Valentino.

What trip to Malaysia’s capital would be complete without a visit to the 88-story Petronas Towers? From 1998 – 2004, they were the tallest buildings in the world – and today remain the tallest twin towers in the world. You can’t go many places in KL without seeing their twin peaks poking through the city skyline. And it featured pretty heavily in the 1999 film “Entrapment”… as if you needed another reason to visit.

Book in advance as it is often full and difficult to get last minute tickets. Bring a healthy sense of adventure too – as someone who doesn’t have a fear of heights, I did have a few bouts of vertigo as I stared down into the streets below from 1500 feet above.  The glitzy Suria KLCC shopping centre can be found on the ground floor.
http://www.petronastwintowers.com.my/

Believed to be around 400 million years old, the Batu Caves are one of the most popular Hindu shrines outside of India. A complex of limestone caverns housing a series of temples, the Batu Caves are accessed by passing a 140 foot high golden statue of the Hindu deity Lord Murugan (the largest of its kind in the world) and climbing 272 concrete steps into the natural caves.

The entrance to the main cave is shaped like a spear, similar to that held by Lord Murugan – for those not up to date on their Hindu gods, it is believed that Lord Murugan used this spear to destroy the evil demon Soorapadman, which is now commemorated during the Hindu festival of Thaipusam. And each year, nearly 1.5 million Tamil Hindus from all over the world gather at the Batu Caves to celebrate this popular Hindu festival. As part of the Thaispusam festival, devotees who had their prayers answered by Lord Murugan must give him thanks. What is the most popular method of giving thanks to Lord Murugan, you may ask?  Well, naturally, it is to donate your hair! So during Thaispusam, it is not uncommon to see both men and woman shaving their heads and offering their hair as thanks.

Access to the main cave is free of charge – beware of taxi drivers and touts trying to tell you that it costs money to enter the caves! The caves are accessible by train, bus or car (note there is a 2 MYR charge for parking). As it is a religious site, women should not wear shorts or skirts higher than knee-length, and shoulders should be covered. If you do not have anything to cover your shoulders or legs, you can rent sarongs from the temple for around 3 MYR per item. The Thaipusam festival takes place usually at the end of January or early February and lasts for several days. 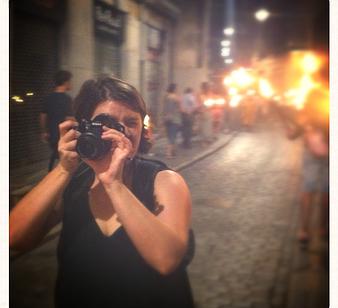