Janfusun Fancyworld is a fun-filled Theme Park situated in Taiwan’s Gukeng Town, Yunlin County, first opened to the public in 1990. This Taiwanese theme park offers a selection of rides and also a water park all in the same venue.

Riding from Minxiong area, the journey took around 50 minutes to arrive including the coffee pit stop. The morning sun made the day ahead look promising and the ride worthwhile.

Arriving at Janfusun Fancyworld, the first impression was good. The park is built around a hilly area presenting some excellent views. After buying tickets (which can be pre-booked and purchased at the nearby 7-11 and the entrance gate) it’s then up a series of elevators.

Once inside the theme park, one of the most noticeable attractions is the 88 metres high Ferris wheel, which is a symbol of the park and also the largest wheel in Taiwan. Although not a fast paced, nor a heart-stopping ride either, once sitting inside the Ferris wheel cart it’s possible to witness a magnificent panoramic view overseeing Chianan Plains.

A ride recommended for any adrenaline junky would be the Diving Machine G5. A 380-metre long ride with a 55 metre, 90-degree drop, this ride was the second of its type to be built by the Swiss company who designed it. Due to having the same manufacturer, the ride is practically the same as the Oblivion ride at Alton Towers in the UK, and very similar to the Drive Coaster at Chimelong Paradise, China. Both of which I have ridden before.

After taking a ride on the Diving Machine G5, head over to the Insane Speed ride. This is another temptation for the roller coaster junkies, offering vertical loops, 180-degree banked turnaround, corkscrews, and a 4-G double helix.

Surprisingly, entry to the water park was included with the price of the ticket, but time was tight when we finally got round to getting in the water as the water park side closes at 4 pm.

All the usual rides expected at any water park can be found at Janfusun Fancyworld, with names including Tornado, Cannon Bowl, Muliwai Lazy River, and Oahu Island Big Wave. Realistically it was a nice feature having entry to both, but a couple of hours is more than enough to see the smaller waterpark.

Beyond the rides, the park features entertaining live performance shows with daring acrobats and dance shows. The Russian show performance being quite spectacular.

As expected, there were a series of food and drink vendors, including a 7-11 store outside the gate for those who need a top up of convenience food. Strangely for a theme park, there was a coffee museum inside.

Finally, what was the best thing about visiting this Taiwanese theme park?
No queuing. That’s right – every ride was just walked on with no waiting, often to front row seats!

By Tools of Travel 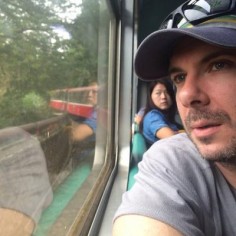 More posts by Tools of Travel