This beautiful cultural tour covers the four districts of western Bhutan: the fertile valley of Paro, Thimphu – the capital city without traffic lights, Punakha – the ancient capital of Bhutan, and the beautiful Phobjikha Valley.

En route to Punakha, Dochu la pass (3,100 m) presents a magnificent glimpse of the Mount Gangkar Punsum (Bhutan’s highest mountain which stands at 7550m) and the eastern Himalayas. On the way to Punakha amidst paddy fields, stands the Chimi Lhakhang built in the year 1499 by Lama Drukpa Kuenley (known as the Divine Madman). The temple is also known as the fertility temple.

Punakha Dzong is magnificently located at the confluence of two rivers (Pho-chu and the Mo-chu). The Dzong was constructed in the year 1637 – 1638. It is the second largest and the second oldest Dzong of the country. The Dzong was the administrative centre and the seat of the Government of Bhutan until 1955.

Phobjikha serves as the winter home for the rare Black-Neck cranes that migrate from Tibet in late October until April. The villagers celebrate their arrival as Black-Neck cranes are deeply revered as a heavenly bird. These birds appear in Bhutanese folk lore, songs, dances and even used as the logo for the former governing political body of Bhutan.

By Druk and Drukpa Tours 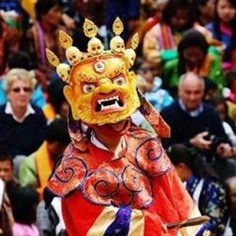