If you’re looking for a truly out of the ordinary sightseeing experience in London, a helicopter flight over the Capital will reveal all of the top tourist hotspots like you’ve never seen them before!

London has always been one of the world’s most popular tourist destinations, and deservedly so, as this amazing city teems with diverse cultures, amazing spaces and historic architecture. What better way to see London than from the air – in a guided helicopter flight right over the heart of this stunning city?

Redhill Helicopters offer frequent helicopter flights over London, covering all of the major sightseeing destinations. Setting off from Redhill in Surrey, you’ll fly north to meet the River Thames at Barnes, where you’ll then follow the path of the river as it wends its way through the very heart of London. You’ll see the iconic buildings of Olympia, the Royal Albert Hall, Battersea Power Station, Marble Arch and Buckingham Palace. Just imagine peering down to see whether the Royal Family are in residence on the day of your flight!

As your flight progresses, you’ll see countless more famous landmarks, including the London Eye, Westminster Cathedral, the Houses of Parliament, and St. Paul’s Cathedral. Of course, these major sights will be easy to spot, but it’s also great fun to try to spot your own personal favourite places as you fly over them. From the Royal Parks, to Shakespeare’s Globe Theatre, the Tate Modern and places like Borough Market or Spitalfields, if you keep your eyes peeled, you should be able to spot a huge number of familiar places along the route.

Heading west along the river, the flight then reaches the City of London, the UK’s financial district. Among the many skyscrapers, you’ll see the iconic Shard Building and The Gherkin, as well as City Hall, the Lloyds Building and the Bank of England. Look closely, and you should be able to spot the Monument, built to commemorate the Great Fire of London.

At Tower Bridge and the Tower of London, the helicopter turns for the return leg of the flight, offering you another chance to spot yet more attractions from the air. Your pilot will point out additional locations as you fly, and on a clear day you’ll enjoy distant views of both Wembley Stadium and Canary Wharf.

Redhill Helicopters operates from Redhill Aerodrome, in Surrey. The aerodrome is located near Junction 8 of the M25, and is easily accessible by public transport from London and Gatwick Airport. There are frequent trains to Redhill from several London stations, including Victoria, Clapham Junction and London Bridge, as well as from Gatwick Airport and Brighton. From Redhill station, it’s just a short taxi ride to the aerodrome.

Whether you’re looking for an amazing experience to give as a gift, or you simply want to enjoy the thrill of your first ever helicopter ride, flying over one of the world’s most iconic skylines, Redhill Helicopters offer a truly memorable and unique sightseeing experience. Book online today at www.redhillhelicopters.com. 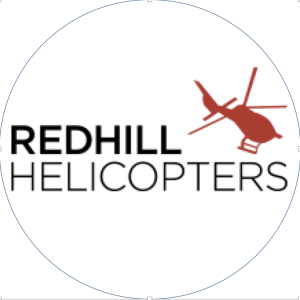