home / India / A visit to the Tehri Dam

The snow clad Himalayas, the chill in the air, the warmth in people’s hearts and a Maggi in the mountains is what the heart desires yet again. Summer of 2015 gave me ample opportunities to travel to the Himalayas as they became my favourite escape route from anything and everything.

Tonight, as I sit back and stare at the pictures, I reminisce about the few days spent at the Himalayan Eco Lodge, Sursingdhar with my blogger buddies. We lazed around, we talked, we discussed issues concerning the nation, we visited Tehri Dam, we played carrom, we went for a hike, we made travel plans, we read books, we visited the nearby hill towns and made merry.

Wondering why this sudden blast from the past? Well, because yesterday we decided to re-live that trip and hopefully, we’ll be packing our bags soon.

Sursingdhar, a small town tucked away in the Himalayas in the Tehri region will remain very special to me. It brought many firsts and strengthened many bonds. All credit goes to Great India Outdoors for making it such a special holiday for me. Their Himalayan Eco Lodge at Sursingdhar deserves a whole post, for the amazing location and hospitality as well as the fact that Himalayan peaks like the Nanda Devi are clearly visible from the balcony. More on that in another post because this one is for an architectural marvel we witnessed while travelling to Tehri.

Tehri Dam is the tallest dam in India, and one of the tallest in the world. Built in the Himalayan foothills, on the Bhagirathi River, it is a showcase of new age India. Just looking at it even from a distance, one feels proud of the nation for being able to achieve such great excellence. Even though the Tehri Dam faced several political and environmental protests while being constructed, it sure is one of the greatest achievements in terms of sheer engineering magic.

Power generated from the Tehri Dam is distributed to Uttar Pradesh, Uttarakhand, Punjab, Delhi, Haryana, Jammu & Kashmir, Chandigarh, Rajasthan and Himachal Pradesh. It is located in a region of high seismic activity and it claims to be able to withstand an earthquake of 8 points on the Richter scale. Isn’t that an amazing claim to make?

Next time you’re in the vicinity, do plan a visit and be amazed by things man can do. We witnessed a beautiful sunset from there. The scenery is an interesting amalgamation of natural wild beauty and man made brilliance. It is difficult to say whose craftsmanship one admires more and that does not happen very often.

The reservoir of the dam is huge and doubles up as a lake for some water sports. We wanted to just embrace it all and we came back with many stories of how it finally came into being. Passers by would just start narrating their version, and how they felt about disturbing mother nature and the construction of this dam. The stories were interesting but what moved me the most were the remains of shattered homes of people of old Tehri, which was washed out in the floods of2013.

During the time of our visit, the monsoon hadn’t arrived yet, the water was shallow and we could walk on the river bed. It was a very disheartening sight and one I can never forget. Concrete remains of homes that were washed away were our landscape. Things that once drowned were back to the surface and made us all sad. The devastation was evident and I let out a silent prayer for people whose lives that flood had changed forever. 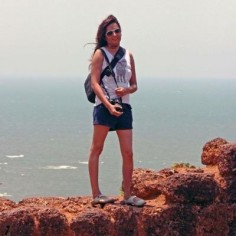