Mauritius is the most developed of the Mascarene Islands east of Madagascar in the Indian Ocean.  One of the world’s top luxury tourism destinations with a tropical climate, countless beaches and a range of natural and man-made attractions to enjoy.  Sunbathing, swimming, luxurious hotels with sumptuous food.  Most Mauritians are multilingual: Mauritian Creole, English, French and Asian languages, and you will find the people warm and gregarious.

As the days drift by you may wish to see and do more and the capital, Port Louis, has lots to offer.  The main tourist attractions in town include: Champ de Mars Racecourse, Caudan Waterfront, the Bazaar, Chinatown and old Port Louis Theatre.  Out of town, Mauritius Botanical Garden, commonly called Pamplemousses, the oldest in the Southern Hemisphere is one of the most popular places to visit, known for its giant water lilies, spice garden and collection of palms.  A little further inland into the lush landscape, Eureka Creole House museum, surrounded by enchanting tropical gardens with cascading waterfalls.

The island’s natural assets truly enhance its appeal, a mountainous interior gives way to rainforests, waterfalls and exotic flora and fauna.  Deep in its midst is a secluded lake, the Grand Bassin, declared a holy lake by the Hindus of Mauritius.  The Black River Gorges National Park provides 60 kilometres of trails to walk, many endemic plants and animals such as the Mauritian flying fox and exotic scenery to discover.  Chamarel Park and Waterfalls is a major attraction with its unique, ‘seven-coloured earth’ geological curiosity, definitely worth leaving the beach for.

Then dotted around the main island are smaller pockets of paradise: Île aux Cerfs, Gabriel Island and Île aux Aigrettes, a tiny coral island, protected for its rare plants and wildlife by the Mauritian Wildlife Foundation.  Mauritius was the only known habitat of the now extinct dodo, a previously unknown species of bird until the island was discovered.  Dodos were descendants of a type of pigeon and today this is the only place where the extremely rare Pink Pigeon exists.

If you liked Mauritius, why don't you try.. 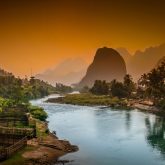