The former Capital of Marwar State was founded in 1459 by Rao Jodha who claimed descent from Lord Rama (the hero of the epic Ramayana). The city was built as a result of warring brothers.

The massive fort-Mehrangarh, came first and around it grew the city of Jodhpur protected by a high stone wall with seven gates and countless bastions. Today, the city has grown to become the second largest city of Rajasthan.

Jodhpur is still one of the leading centres for wood, cattle, camels, salt and agricultural crops. Exploring the city promises you a delightful encounter with an array of tempting art and craft creations and also the unusual lifestyle and costumes of Jodhpuris.

Spread over 5 km on a perpendicular hill and looking down from a height of about 100 meters, the fort is one of the best preserved in Rajasthan. It houses some of the most intricately adorned palaces with exquisitely carved panels and latticed windows. Moti Mahal, Sheesh Mahal, Sileh Khana and Daulat Khana are some of the important areas to visit and view the collection of palanquins, howdahs, royal cradles, miniature, musical instruments, costumes and furniture.

A cluster of royal cenotaphs, in white marble, lies very close to the fort. Built in 1899 in memory of Maharaja Jaswant Singh, the cenotaphs also house portraits of the rulers of Jodhpur. It has extremely rare 15 cm thick pure infinite marble slabs.

The only palace to be built in the mid 20th century in India, it was meant to be a famine relief project which gave employment to citizens for 16 long years. It is an impressive rose color sandstone structure. It is, today, run as a hotel while a part of it is still retained by the erstwhile royal family.

Situated 9 kms to the north of Jodhpur, Mandore was the capital of Marwar prior to the foundation of Jodhpur standing on a plateau overlooking the present Mandore Gardens. The extensive gardens with high rock terraces make it a popular local attraction and a picnic spot.

The ruins of the original capital of Marwar stand in lush, shady gardens and are entered via the Ajit Pole, the gate that was built in celebration of Ajit Singh’s victory over the Moghals in 1707 AD.

The gardens also contain the cenotaphs of Jodhpur rulers, and the largest and the finest of them all, the soaring memorial to Maharaja Ajit Singh. Here, one may find a captivating collection of cremation-site memorials, mostly 17th-18th century set amidst surprisingly green, clean and hassle-free gardens.

The highlight of the Mandore Gardens include the graphic Hall of Heroes, a rock wall with high relief, brightly painted depictions of local heroes such as Pabuji and Chamunda and crowded modern shrine of 300 million Gods.

Fairs in Rajasthan are mythological in nature, relating to gods and goddesses. They are even celebrated to commemorate the brave deeds of medieval heroes.

Mandore Gardens provide the perfect venue for The Marwar Festival, held in memory of the heroes of Rajasthan. The festival is celebrated in the Hindu month of Ashwin (Sept.-Oct.) in Jodhpur, the former capital of Marwar Province. 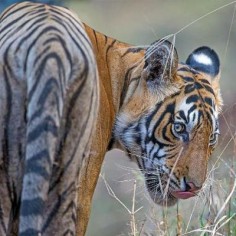