Our time in Cambodia began in Siem Reap, the gateway city to the temples of Angkor Wat. Like most visitors to Cambodia, Angkor Wat was on our must-see list, so we planned accordingly. All in all, we had three incredible days of exploring the city and taking a trip back in time as we wandered around the world’s largest religious monument.

Construction of Angkor Wat itself began in the first half of the twelfth century. It was originally dedicated as a Hindu temple, and throughout the centuries served as a Buddhist one as well, depending on the religious affiliation of the then-ruler. Today, it is open for visitors who can tour from sunrise to sunset, weaving in and out of hallways, among stupa, past eroded statues of Buddha, Shiva, Vishnu and Ganesha, while stopping to admire the architectural and engineering feat that has withstood the passage of nearly 1,000 years. The many, many stone columns and open windows make for excellent lighting as well, so for any photographers reading out there, plan to be at Angkor Wat in the late afternoon.

Visitors can purchase a one, three, or seven day pass. We opted for the three-day pass. Our marathon tour of Angkor Wat and the other temples in the area began by watching sunrise over one of the many lakes, and continued on to Ta Keo and Ta Prohm; Bayon, the Elephant Wall, and the Leper King Terrace inside the Angkor Thom complex; and then to Angkor Wat (as described above), whose outline is featured on the Cambodian flag.

Day two began early as well, and took us much further away from town to the ruins of Banteay Srei, known for its intricate carvings; and to Kbal Spean, where a one-mile hike through the jungle leads to a waterfall with carvings of Ganesh, Shiva and Vishnu on stones in the riverbed!

We can happily recommend all of these sites, and would advise visitors to hire a tuk-tuk to drive around the complex – the temples are too far apart to walk between them. The main Angkor Wat attractions are within reasonable bicycling distance from Siem Reap, but it is blazing hot, and humid so be realistic about your abilities. Also, the Angkor Center for Conservation of Biodiversity is near Kbal Spean, and offers free tours twice daily.

Apart from temples, we toured the Artisans d’Angkor Silk Farm (for FREE!, including the shuttle) just outside Siem Reap, and feasted on more, delicious street food at the Night Market; sipped $1 fresh fruit smoothies; and relaxed with $0.50 beers along Pub Street.

Following Siem Reap we took the bus to sleepy Battambang, where we toured a hill-top temple, killing caves from the Khmer Rouge era, and biked along the river. Honestly, there’s not much to do in this town, but its environs are stunning, and the Ganesha Guesthouse had games, good internet, and people from the world over to talk to, which made it a nice pit-stop after a busy week.

Check back soon for more stories of our year-long honeymoon, straight from the beach and Cambodia’s capital city, Phnom Penh. 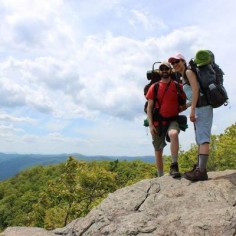