Day 1 : Hanoi
On arrival at Noi Bai Airport, you are met and transferred to your hotel. Hanoi, Vietnam’s capital, is a stylish and gracious city that retains a unique old-world charm and has some of Asia’s most striking colonial architecture. The many lakes and parks make for a relaxing atmosphere.
Overnight in hotel, Hanoi.

Day 2 : Hanoi – Halong (B,L,D)
After breakfast we start our journey with a four hour drive through the Red River Delta to Ha Long City.  Arrive in Halong City, check in, and cruise through the limestone cliffs and emerald waters of Halong Bay, giving us the chance to take in the stunning scenery of this World Heritage Site. While on board we will be served a sumptuous, fresh, local seafood lunch followed by a swim and exploring some of the limestone caves in this area. When the sun comes down we drop anchor for the night nearby a remote island.

• 12h30: check-in registration
• 13h00: Have lunch with welcome wine.
• 14h00: A fantastic cruise in Ha Long Bay
• 15h00: Optional visit to Thien Cung cave, Dau Go cave, round over Tuan Chau island, or Sungsot cave
• Optional swim at lovely beaches.  Afternoon tea with pastries on the sundeck or in the restaurant and drink before dinner
• 18h00: Junk cruise Angkor by the lagoon
• 19h00: Enjoy diner and overnight on Junk

Day 3 : Halong – Hanoi (B)
Rising to the sound of the ocean coming to life for another lovely day. We breakfast over the sunrise:
07h30: Junk boat once again sets sail through breathtaking secluded Halong bay
08h00: Enjoy breakfast while cruising
10h00 : Return to Halong city and have lunch on board. Back to Halong wharf and disembark
Transfer back to Hanoi around 16:00 PM.

We visit sights before continuing to the peaceful lake of Hoan Kiem. In front of this lake is the famous water puppet theatre where we will see a fantastic performance.
Overnight in hotel, Hanoi.

Day 4 : Hanoi – Hue (B,L)
Breakfast at the hotel. A pleasant way to commence the day is a walk around Hoan Kiem Lake at dawn, joining hundreds of people there doing their morning exercises (optional, unaccompanied). The next destination of our trip is Hue via a short flight from Hanoi. As Vietnam’s last feudal capital, this small and quiet city of Hue is widely known for its magnificent architecture, pagodas and royal tombs laid out in several small villages and surrounding hills. We spend the afternoon visiting Hue’s massive citadel containing the Imperial City and the Purple Forbidden City. This royal residence was all but destroyed during the 1968 Tet Offensive; however it is still fascinating to walk among the ruins. After a pleasant boat trip we return to the town and enjoy a walk in the bustling Dong Ba Market that sells a wide variety of local goods and handicraft. Along the way we pass by many fantastic eating spots selling foods that the visitor should try.
Overnight in hotel, Hue.

Day 5 : Hue – Danang – Hoi An (B,L)
Breakfast at the hotel. The beautiful riverside pagoda of Thien Mu, now the symbol of Hue, and the elaborate royal tomb of Emperor Tu Duc are not to be missed. We include these in a guided cruise on the Perfume River. Upon leaving Hue we drive south to Hoi An which was originally a Cham seaport but has been influenced by a myriad of traders from various cultures down the centuries. The scenic road hugs the coastline before crossing over the winding Hai Van pass. A view from the top of the pass is one of Vietnam’s most impressive panoramic scenes. We stop en route to visit the world-famous Cham Museum in Danang City and the Marble Mountain whose peaks represent the five elements of the universe according to Chinese feng shui geomancy.
Overnight in hotel, Hoi An.

Day 6 : Hoi An (B,L)
Breakfast at the hotel. The ancient architecture of Hoi An is a fascinating combination of Vietnamese traditional styles with Chinese and Japanese influences. There is plenty to see in this delightful town, attractions include: the famous Japanese covered-bridges, Pottery Museum, 200-year old Tamky House, Chua Ong Pagoda and the vibrant market. Today, we include these on a walking tour passing many low-tiled houses scattered along the small streets and guildhalls which reflect the town’s multi-cultural past. A perfect way to round off the day is a boat trip on the Thu Bon River, which also gives us a chance to admire the spectacular countryside and explore a handicraft ceramic village and boat building yard.
Overnight in hotel, Hoi An.

Day 7 : Hoi An – Nha Trang (B,L)
Breakfast at the hotel. An early morning transfer to Danang Airport for a short flight to Nha Trang. The fabulous sunny weather, turquoise water surrounding a string of offshore islands and a white sandy beach stretching the whole length of the city make Nha Trang an ideal place for anyone seeking an enjoyable escape. After checking into our hotel we visit some of Nha Trang’s major sights, including the Oceanographic Institute, Long Son Pagoda with its famous giant Buddha image, Hon Chong Rock formation and the impressive Ponagar Cham Towers overlooking the colourful fishing port. The remainder of the day will be at leisure for you to enjoy the beach and hotel facilities. Overnight in hotel, Nha Trang.

Day 8 : Nha Trang – Dalat (B,L)
Breakfast at the hotel. Upon leaving Nha Trang we head south towards Dalat, known as the “City of Eternal Spring” in the central highlands. The journey will take you past the famous Cam Ranh Bay before arriving at Po Klong Jarai Towers which reflects the interesting culture and history of the Cham people. At an elevation of over 1,000 meters, the hill station of Dalat was founded in the early years of the last century for the French colonials to escape the heat and chaos of Saigon. On arrival in Dalat we start our tour taking us through plenty of French colonial architecture to the summer residence of Vietnam’s last emperor, Bao Dai, who was forced to abdicate in 1945 shortly after the end of World War II. Among the sights are the Lam Ty Ni Pagoda and Hang Nga Guesthouse, known as the Crazy House because of its bizarre architecture.
Overnight in hotel, Dalat.

Day 9 : Dalat – Ho Chi Minh City (B)
Breakfast at the hotel. The next destination on our trip is Ho Chi Minh City, still called Saigon by many locals. Pick up at airport then transfer to hotel. Overnight at hotel in Ho Chi Minh.

Day 10 : Ho Chi Minh City – Cu Chi Tunnels (B,L)
Breakfast at the hotel. The sightseeing tour of Ho Chi Minh City begins with a visit to the Reunification Palace which was the former residence of the President of South Vietnam until April 1975. Close to the palace are some striking French colonial structures including the Notre Dame Cathedral and old Sai Gon Post Office. We also visit the Jade Emperor Pagoda and War Remnant Museum before continuing to the bustling Ben Thanh Market where everything and anything is for sale. We then transfer out to explore the Cu Chi Tunnels, an incredible underground maze of some 200km, constructed by Vietnamese fighters during the long struggle for independence. The tunnels contained hospitals, accommodation and schools, and were used as a military base for the Vietcong in the American War.
Overnight in hotel, Ho Chi Minh City.

Day 11 : Ho Chi Minh City – Mekong Delta (B,L)
Breakfast at the hotel. Heading out of the town, we travel by road to the Mekong Delta, Vietnam’s largest rice bowl. On arrival in My Tho we embark on a boat navigating around the intricate small canals in the delta region, which is a great way to observe the local lifestyle close-up and catch a view of the many islands dotting the delta. The exciting excursion will pass lush green vegetation before arriving at the famous Unicorn Island. Here we have the chance to stroll around an orchard to taste many seasonal fruits and enjoy wonderful traditional music. The next stop on our trip is Ben Tre Province to see some cottage industries. After lunch we return to Ho Chi Minh City, stopping along the way to see the beautiful Ving Trang Pagoda and Cholon, Saigon’s Chinatown, which is crammed with sacred temples and mysterious, narrow lanes.
Overnight in hotel, Ho Chi Minh City.

Day 12 : Ho Chi Minh City – Departure (B)  Breakfast at the hotel. There is free time to relax or further explore Ho Chi Minh City by yourself before your transfer to Tan Son Nhat Airport for your departure flight. 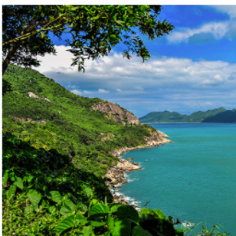