The castle, Burg Rheinstein, is located approx. 5 kilometers (3 miles) westward of Bingen, down the river Rhine, at the south entrance of the UNESCO Cultural Heritage of the Upper Middle-Rhine Valley (Oberes Mittelrheintal), face to face with the village of Assmannshausen. The castle was the symbol of the castle-reconstruction period in the 19th century, so-called Romanticism, because of its impressive location, and also its eventful history had many highlights.

Rheinstein Castle is the property of the Hecher family. In the 2nd generation, Markus and Cornelia Hecher take care of the cultural concerns of the castle. The 3rd generation, son Marco and his spouse Cora, have been responsible for the gastronomic concept, since 2010. Daughter Carina lives with her partner Michael in Mainz and works in Frankfurt, nevertheless, both are firmly connected with the castle and help with words and deeds. 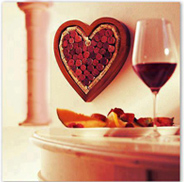