Newgrange is a prehistoric monument, a large kidney shaped mound of earth and stone covering an area over one acre in size. Quite simply, it is a mound of stone and earth, approximately 200,000 tonnes, retained by kerbstones at the base, with a long passageway accessing a central chamber. Some of the  97 kerbstones at the base are decorated with intricate, hand carved art. Further carvings can also be seen inside the passageway and chamber recesses. The passageway into the tomb is 19 metres long and ends with a chamber roughly in the shape of a crucifix. Each of the three recesses of the chamber contains large basin stones which would have contained the remains of the dead. Around the tomb there is a circle of standing stones, however, most archaeologists agree that these were added at a much later stage, during the Bronze Age. Newgrange is the best known tomb in Ireland, there are two others, Knowth and Dowth, which together have been designated a World Heritage Site by UNESCO.

Where is Newgrange?
Situated 2kms west of Donore village in County Meath, Ireland. Drogheda is the nearest large town and is approximately a 40 minute drive from Dublin.

When was it built?
Constructed around 3,200 B.C. meaning it is approximately 5,200 years old and is therefore older than the Great Pyramid in Egypt or Stonehenge in England. It was constructed during the period referred to as Neolithic or New Stone Age.

Why was it built?
Newgrange certainly is a passage tomb and during excavations the remains of at least five people were recovered. Many were cremated and it is believed the basin stones in each of the recesses would have held the remains.

There are different opinions as to the true purpose of Newgrange. There is consensus that is was a burial tomb for persons of significance, perhaps kings or tribal leaders. It is generally believed that Newgrange and, indeed, Knowth and Dowth had religious significance beyond simply being a resting place for the dead, evidenced by the detailed and intricate artwork carved into stone. Some academics believe that death and the dead were central to the religion of the time and these monuments were the focus of that worship or reverence.

Largely influenced by the ‘roof-box’ (see below) and elements of the artwork, other academics believe the sun may have been the central focus of worship. The presence of the ‘roof-box’ would certainly suggest that the solstice was a feature of the religion but whether the sun itself was the focus is much debated.

The knowledge and engineering required to perfectly align the monument to the rising sun cannot be overstated given that it was constructed over 5,000 years ago. As the passageway slopes, from the entrance to the chamber, it also undulates from side to side along its length. This was an intentional design feature and serves to narrow the beam of light so that light can only enter precisely at the solstice.

Can you witness the solstice?
Entry to the monument during the solstice is limited. There are limited spaces for members of the public with admission by way of a free annual lottery. Application forms are available at the Brú na Bóinne centre, although you would need to be very fortunate to be selected!

Can you enter the tomb at other times?
You can enter the monument, but only as part of a guided tour through the Brú na Bóinne Visitor Centre. The visitor centre is located 2km west of Donore village, with Drogheda being the nearest large town. GPS co-ordinates are: Latitude 53.694567 Longtitude -6.4463. A bus service operates from Drogheda Bus depot twice a day, Monday to Friday with no Sunday service. The service is timed to connect with buses arriving from Dublin and departs Drogheda at 11.15 or  14.45.

Newgrange is open all year round except from December 24th to 27th but Knowth opens only from Easter to October 16th. An audio-visual presentation (duration 7 minutes) explains what you will experience and the exhibition features a full scale replica of the Newgrange chamber and also a full model of the smaller tomb at Knowth.

As the full tour can last up to three hours you can purchase (reduced price) tickets for the visitor centre only, or combine with one or other of the monuments.

For capacity and safety reasons entry to Newgrange monument is restricted to 24 people at any one time. The last tour commences at the visitor centre 1 hour and 45 minutes before closing. Due to high numbers in the summer months it is advisable to arrive early. To find out more about Newgrange and book accommodation in the area, please visit us at www.visitnewgrange.com. 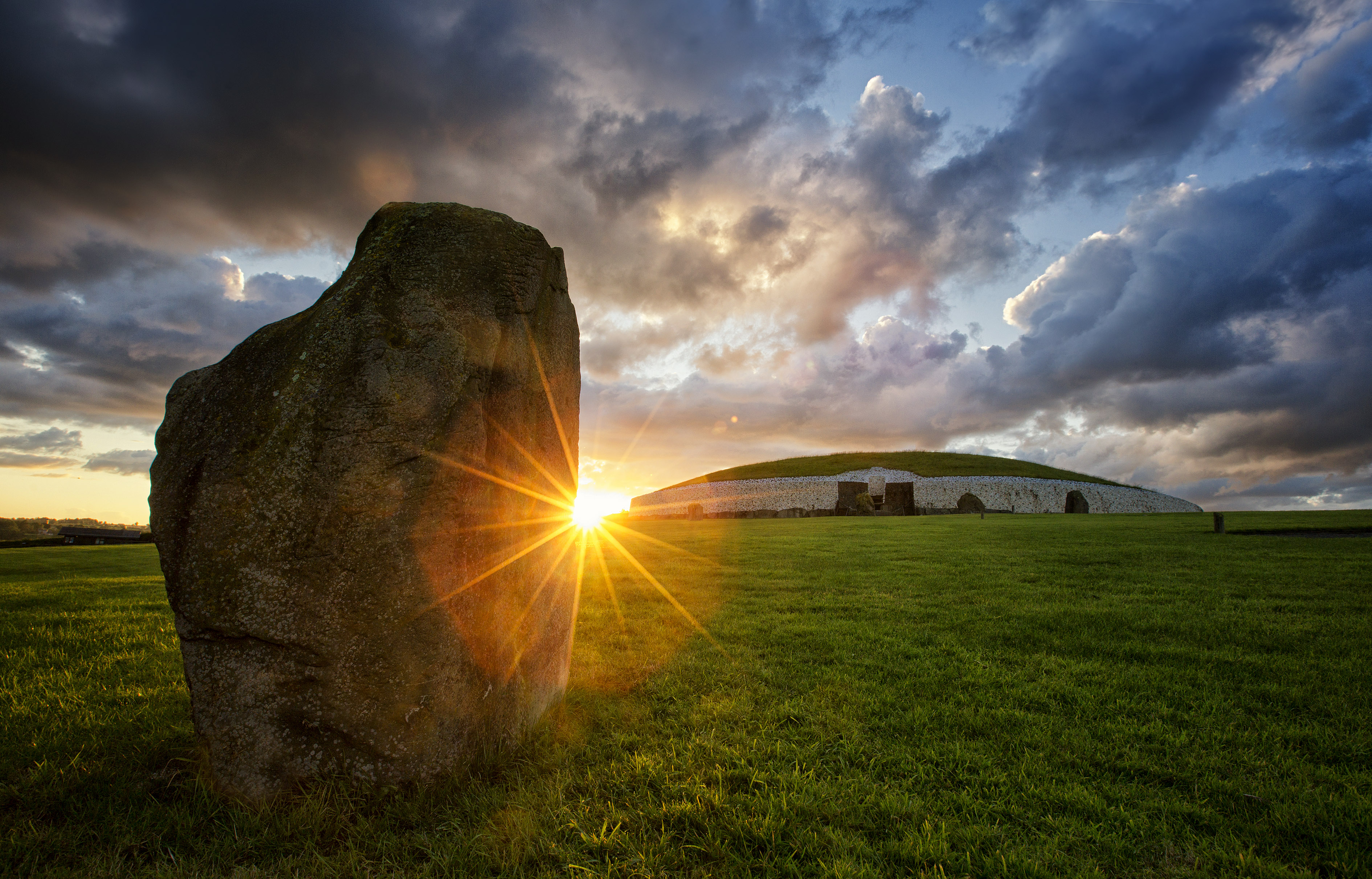