This year’s holiday was a road trip in the motorhome to Rome visiting places in Spain, France and Italy on the way there and back. There was a lot of time spent driving so only made entries when we did something interesting.

18th May – Started our holiday with a four and a half hour drive to Aranjuez. All went well and we arrived at the campsite at 5pm. Set up motorhome then went for a swim in the campsite pool to cool down as it was hotter here, than it had been when we left home.

19th May – Went round the palace at Aranjuez and a boat museum which were really nice.  Then drove to our next location at Nuevalos called Camping Lago Resort. It was really good, near a lake, with some lovely walks from the site.

20th May – It was cold when we got up and we had to resort back to long trousers and fleeces to do a three hour walk to Monasterio de Piedra and back along the ruta de serralba to the campsite.

21st May – Drove to La Vall campsite in Taradell near Vic which was a lovely site with some walks in the forest in which the site was located. Not easy to find and don’t follow the satnav as it sends you along a bumpy dirt track across a field instead of the nice road that we left by.

22nd May – Drove to the village of Viladrau saw the start of a rally.

24th May – Went up into France to stay with some friends.  Travelled to Saint-Rémy-de-Provence where Vincent van Gogh spent a year in the Saint-Paul asylum. The village was full of galleries and souvenir shops and as it was Sunday crowded with people. We did a little walk but soon had had enough of the crowds and traffic, so returned to the campsite as soon as we could.

25th May – Next to Rustrel, where we did a nice walk around La Grande Montagne. It was a nice walk but the instructions in our walking book where not very clear, so it gave us a chance to do a bit of navigation using a map and a compass, the first time for ages.

27th May – Into Italy now and we had a problem this morning as the satnav would not work. Had to use the mobile phone for directions, not sure how much it would cost but only needed it to get onto the motorway then switched it off. The satnav started working again and we did not get lost. If we had taken the non motorway route it would have taken twice as long.  We called into Sestri Levante, an old seaside resort, walked round the harbour and onto the beach to try to get Scoobie to have a paddle.

28th May – The satnav said that it would only take 15 minutes longer by not using the motorway that was our first mistake and we took a lot longer than the estimate to get to Lucca.  We could not park the motorhome in the spaces provided just outside the city walls. We eventually found a camper van park and then spent a lovely day walking round Lucca which is well worth a visit.  We had our first and only Italian ice cream on this trip.

29th May – We decided to head towards Florence next using the motorway this time and managed to get to the campsite without any traumas. It was a nice site set in a forest with lots of walks to do. We did a 10k walk through the forest enjoying the Tuscany countryside.

30th May – Did a 13k walk which turned out to be 17k – took five and a half hours! We walked from the campsite through the forest and we had to rely on the signposts for directions. We missed a left turn so ended up going further. We passed through the village of Massa hoping to find a bar for coffee but alas no bar, ended up on a park bench eating crunchy bars. Spotted some animals in the forest.

31st May – Drove motorhome to railway station and left Scoobie in it while we got the train into Florence. Too many people there for our liking, and there were massive queues everywhere so we just walked around to see all the sites without going into any of them. When we got back on the train to the motorhome we drove to the next campsite which was on small roads with a 50k per hour speed limit all the way (yawn).

2nd June – Today was supposed to be a sightseeing trip round Siena. We decided not to take the bus from the campsite into Siena and drive to one of the parking areas just outside the city instead. However, they wanted €20 to park in a car park, which did not look very nice and no other parking area was suitable for us to park the motorhome.  We decided to give it a miss and drive on towards Rome. We stayed at Happy Village campsite just outside Rome. It was a very nice site and there was a free bus from the site to the metro station into the centre of Rome.

3rd June – Left the campsite at 8:30 by bus to the local metro station then into the centre of Rome. We queued up and eventually got into the Vatican museum which took us about two and a half hours. The museum is fantastic, lots of frescoes, paintings and sculptures to see.  We got the train back from the metro station to catch the bus back to the site where we arrived after being away for about six and a half hours.

4th June – We decided that we did not want to drive back from Rome to Spain so we drove to the ferry port for Rome which was at Civitavecchia to see if we could get on the ferry to Barcelona that night.  We had to wait until 5pm when the ticket office opened before we could find out. Having some time on our hands we drove back along the coast and had a coffee at a luxury beach front bar called Little Paradise. We managed to get tickets for that night and endured the crossing of over 20 hours.

5th June – Got off the ferry around 7pm today and drove for a couple of hours to a campsite.  Had an early night to recover from the ferry crossing.

6th June – The drive to Albarracin was going to take about four and a half hours which we tried to do but it was just too far, so we stopped at a campsite after three hours of driving. Walked to a magnificent waterfall then settled down to watch the champions league football final in the campsite bar. All the other people in the bar were Spanish but they were supporting Juventus which we thought was strange. When we asked them about it they said that they were from Valencia and did not like Barcelona. Had a good night anyway and the best team won.

7th June – Went for a nice walk along the via verde, (the old olive railway line) which was next to the campsite for about 3 hours.  We had hoped to get a cup of coffee at a bar near the railway line but gave up when to got to the exit for a village called Jerica which was still a long way off, so we made do with water and then returned back to the campsite.

8th June – Went to Albarracin which is a beautiful village in the mountains at around 1000 metres altitude just south of Zaragoza. Settled into the campsite and then walked into the village to look around it had lovely old buildings and an old castle on the hilltop.

9th June – Did a lovely walk to see some cave paintings, getting up to an altitude of 1400 metres.  With about 500 metres to go from the campsite, we got caught in a big thunderstorm.

The next day we decided to return home which was a 4 hour drive away, went perfectly without any problems. We had a great holiday but it was nice to be back home again. 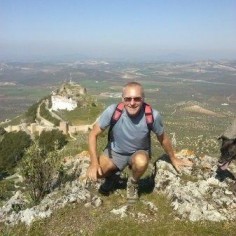