Tradition meets elegance at the Esperas Hotel, one of the world’s best hotels as rated by Fodor’s Travel, located in Oia, Santorini’s premier location.

Thousands of years ago a volcanic island erupted with civilization-ending force. Today it is one of the most dramatic holiday destinations on the planet. The volcano actually preserved, in fantastic detail, the mysterious yet appealing civilization that flourished at the time. But perhaps you haven’t come for the antiquities.

The Aegean’s celebrated light infuses the island’s dramatic scenery with a special energy, from the famous black beaches to the sheer cliffs of the caldera. That same light creates some of the most magnificent sunsets ever and the town of Oia, whose whitewashed cubist houses are like the frosting on a chocolate layer cake, offers the best views.

About twenty three years ago a doctor and his dentist wife discovered a series of caves in Oia, which gave birth to a spectacular hotel centered around cave houses overlooking the caldera, the Esperas Hotel. Since then, it has expanded into an international favorite, famous not only for the views of the sea and the renowned sunsets from its luxurious and charming rooms, but also for celebrating local produce and cuisine in its restaurant. In 2014, the Esperas has been awarded by Fodor’s among the best 100 boutique hotels in the world. Also, in 2015 has been awarded by YADES as the most romantic European historical hotel.

Beautiful as the photos are, it is impossible to capture what a lovely hotel it is in two dimensions. You have to visit to appreciate the helpful staff, attention to detail, and the delightful feel of the place. Don’t miss the pool! 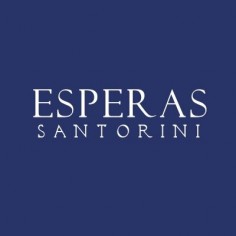