home / England / Out and about in Sherwood Forest

One of the most beautiful things about the District of Newark and Sherwood is the spectacular rolling countryside interspersed with picturesque villages. From legendary Sherwood Forest, home to outlaw Robin Hood, to historic Rufford Abbey Country Park. From Robin Hood’s village of Edwinstowe to Laxton, the only village in England to still operate the medieval three field farming system, this is a wonderful area to explore.

The 400 acre Sherwood Forest National Nature Reserve is famous for being the hideout of Robin Hood and his Merry Men, but it is also home to over 200 species of spider and 1500 species of beetle along with a huge variety of birds and beasts. There are extensive way-marked walks and bridle paths, picnic areas and a Visitor Centre. The Major Oak is the largest tree in this medieval hunting forest and is estimated to be over 800 years old.

A short stroll from the forest is the village of Edwinstowe where, legend has it, Robin Hood married Maid Marion in the picturesque church of St Mary. This busy and vibrant village has a statue of Robin and Marion on the High Street, a variety of shops and restaurants and the Sherwood Forest Art & Craft Centre.

A short drive from Sherwood is Rufford Abbey Country Park. Rufford is a beautiful 150 acre country park set around the ruins of a medieval Cistercian monastery which later became a stately home. The former stables now house a craft shop, café, gift shop and our Tourist Information Centre. The restored Orangery with its Apsidal Gallery features a changing display of ceramics. There is a sculpture park, children’s play area, woodlands and a lake to explore. Rufford is home to a wide variety of water birds and during the winter months is a stopping off point for the Hawfinch.

The historic village of Laxton is the only village in England that still operates the medieval ‘open field’ farming system whereby the three fields are divided into strips. These strips are worked by the farmers of the village under the jurisdiction of a Court Leet and jury. The court ensures that the three year crop rotation continues and that the farmers maintain the boundaries of their strips. On the northern edge of the village is a very well preserved motte and bailey castle dating from the late 11th century. Panoramic views of the village, the open fields and the surrounding woodlands can be seen from the summit.

The pretty village of Wellow is home to one of only three permanent maypoles in the country. Each Spring Bank Holiday the Wellow Maypole Celebrations see the crowning of the May Queen and children dancing traditional dances around the maypole.

Besides Sherwood Forest and Rufford Abbey Country Park, you will find Sherwood Pines Forest Park with its log cabins and Go Ape, Vicar Water Country Park and Thoresby Park. There is so much to see and do in our area that you will want to stay for more than a day. 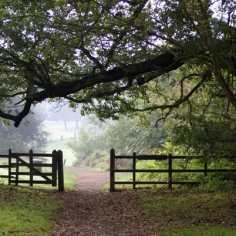