If motor racing is your thing and you haven’t experienced the Le Mans 24 hour Race, then all I can say is, book your crossing!  It takes place in June every year, set in glorious French countryside. The circuit is situated some 4 hours from Calais, depending at what speed you travel.

Most of the hardened racing enthusiasts pitch their tents at one of the many camping grounds dotted around the circuit, which is exactly what I did with some friends of mine.  After a few boxes of beer, the tent was unpacked and an attempt to erect it began, some two hours and a massive thunderstorm later, we realised that our temporary accommodation resembled the Turin Shroud, as it was packed away wet from the last camping adventure.  A couple of us braved the shredded remains that was supposed to be our home for the next few days, I was one of them, until I was woken up by drips of water bouncing off my face, it was time to retreat to the Range Rover.

In the morning race practice begins and we get our first glimpse of the sheer size of the circuit and its facilities. The noise of the cars racing and the smell of Castrol oil that accompanies all race tracks around the world fills the air.  Before we know it, the race has started and whereas before there was some let up in the roar of the Jaguars and Porsches in between qualifying, there was now a constant din as the various teams go flat our for the next 24 hours.  We decide to wander in and around the pits, marvelling at the synchronisation of the pit crews, some of them taking it in turns to sleep despite the noise, grabbing a short cat nap just to recharge their batteries.

Lunch in one of the many large marquee style tents was the next thing on the agenda, followed by a few more bottles of beer.  One of the many things the French do well is organising this kind of event, the food was good, plenty of reasonable beer, and a great venue, not to mention the huge fairground that was set up within the circuit, just incase you hadn’t had enough excitement and needed a further adrenalin RUSH!

As the race came to a close we were all exhausted, couldn’t even begin to imagine what the teams must be feeling like.  Survived one more night sleeping behind the steering wheel and then set off home on our own 4 hour Le Mans race back to Calais.

It wasn’t the most luxurious long weekend I have ever had and certainly not the most romantic, but it was definitely one of my favourites.  A thoroughly fun-fuelled weekend away with the boys. 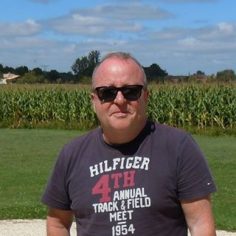